Preprints—“temporary documents whose function is to bridge the time-gap created by publication delays” (Goldschmidt-Clermont, 1965, p. 8)

Paul Ginsparg, a physicist at the Los Alamos National Laboratory, developed the first preprint archive in August 1991. Originally dedicated to papers in high-energy theoretical physics, arXiv.org took several months to attract 1,000 users; presently it reports from 35,000 to 150,000 visits per day.

Preprint servers are usually hosted at professional societies, government sites, and universities. Disciplines such as astronomy, chemistry, computer science, mathematics, and physics have taken the lead in preprint distribution.

Perhaps because scientists and researchers in these fields possessed the first high-level computers, preprint servers became available and then prevalent in these disciplines. Indeed, for graphically dependent sciences, preprint publication on the Web is preferable to paper journals because of the possibilities for inclusion of audio and video and other intense graphics. E-prints may offer numerous value-added elements, including audio and video, as well as linked references to other documents. (Tomaiuolo et al. 2000) 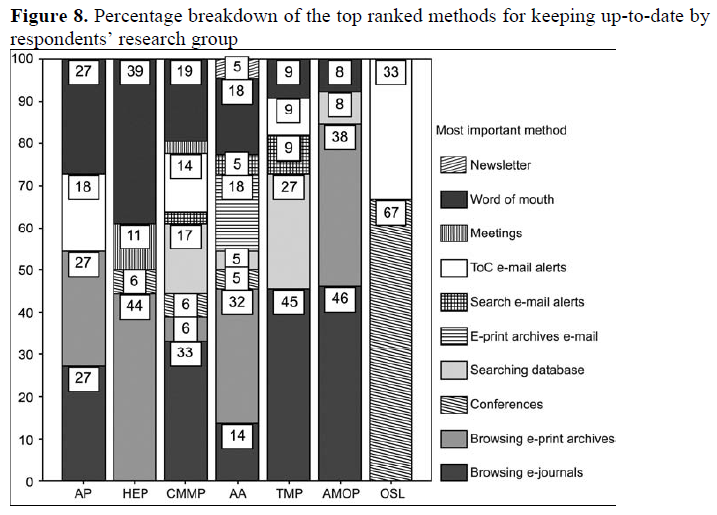 Physicists in HEP rely mostly on searches in subject databases (arXiv.org) for identifying articles they read. The second most used method was searching in Google. The fact that Google was the second used means by which articles were found in the field of HEP might be because of high availability of open access material in HEP that makes everything searchable by general search engines such as Google. In order to keep up-to-date with the developments in HEP they mainly depended on browsing e-print archives, word of mouth and meetings. (Jamali, H., Nicholas, D. 2008)