The American Physical Society is the world's largest organization of physicists and is a member society of the American Institute of Physics.

The American Physical Society was founded on May 20, 1899, when 36 physicists gathered at Columbia University for that purpose. They proclaimed the mission of the new Society to be "to advance and diffuse the knowledge of physics", and in one way or another the APS has been at that task ever since.

Early Years: Journals Added to Meetings
In the early years, virtually the sole activity of the APS was to hold scientific meetings, initially four per year. In 1913, the APS took over the operation of thePhysical Review, which had been founded in 1893 at Cornell, and journal publication became its second major activity.

Physical Review was followed by Reviews of Modern Physics in 1929, and by Physical Review Letters in 1958. Over the years, Physical Reviewhas subdivided into five separate sections as the fields of physics have proliferated and the number of submissions grew.

Recent Years: Expanding Scientific Service through Programs
In more recent years, the activities of the Society have broadened considerably. Stimulated by the increase in Federal funding in the period after the second World War, and even more by the increased public involvement of scientists in the nineteen sixties,  APS is active in public and governmental affairs, and in the international physics community.

In addition, the Society conducts extensive programs in education, public outreach, and media relations. APS divisions and topical groups cover all areas of physics research. Forums reflect the interest of its over 50,000 members in broader issues, and sections are organized by geographical region. 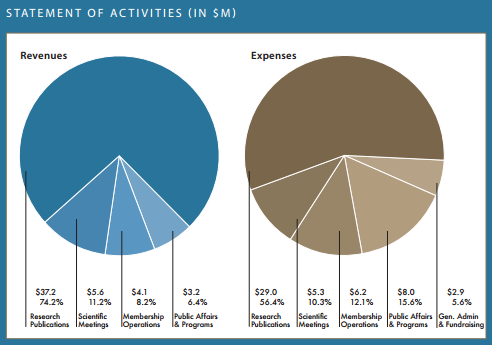 The American Physical Society strives to:

Core activities of the Society are:

To view the progress towards goals and various activities undertaken by the society, visit APS annual reports.

The guiding spirit behind its birth was a member of the Cornell faculty, Edward L. Nichols, who edited it with the help of two of his colleagues, Ernest Merritt and Frederick Bedell.