Communication and Mass Media Complete
Provides comprehensive indexing to the key journals for all aspects of communications studies. Other databases and indexes organized by more than 150 subjects.

Patrons can  connect directly to the full text of articles available in the Library's electronic collections or to Interlibrary Loan if the full text is not available.

Academic Search Premier A multidisciplinary database which provides full-text for over 4,650 scholarly publications, more than 3,600 of them peer-reviewed. Includes topics in the social sciences, humanities, general science, education and most areas of academic study.

ABI/Inform
This business databases features important full‐text journals and much sought‐after titles from the business press as well as key trade publications, dissertations, conference proceedings, and market reports. Communication students will find this database is most useful for organizational communication topics.

SAGE Research Methods Online A web-based research methods tool to help researchers, faculty, and students with research projects. Researchers can explore methods to help them construct research projects, and understand various methods. This database focuses on methodology and is useful for all disciplines.

Is this article peer-reviewed?

Use Ulrichs Periodical Directory (Ulrichsweb) to find out

This is the symbol that tells you a journal is peer reviewed in Ulrichsweb: 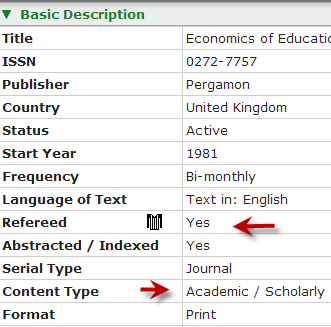