Most of the works published by the Kelmscott Press were novels and collections of poetry devoted to themes of an idyllic, romantic, and magical Middle Ages. Exemplifying these were translations or adaptations of classical and medieval poems like "The Earthly Paradise" and "The Golden Legend." The Press also published original poetry like "The Defence of Guenevere," part of an unfinished series that drew on the legends of King Arthur, which presents Queen Guenevere defending herself after being accused of adultery. Morris' "Poems by the Way" is another collection of original short poems related to tapestries and paintings. 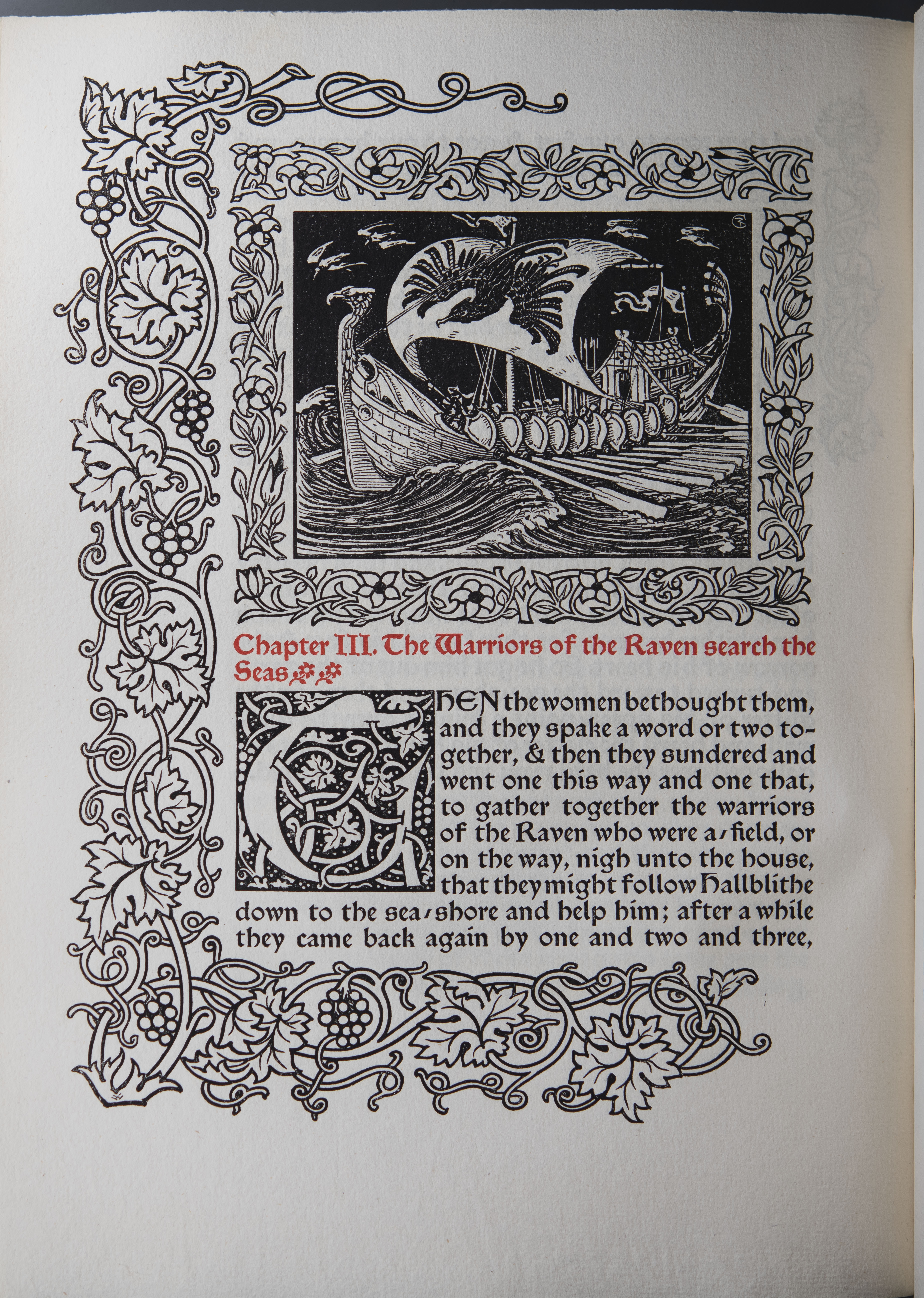 Among the Press' novels were The Story of the Glittering Plain and The Well at the World’s End. Drawing on the popularity of the femme-fatale figure among 19th-century medievalists, the Press also published an English translation of Sidonia the Sorceress. The first two titles were set in Europe's distant past and would go on to influence modern high fantasy literature. Sidonia the Sorceress was based on the real-life Sidonia von Borcke, who was accused of and executed for witchcraft in the 15th century. 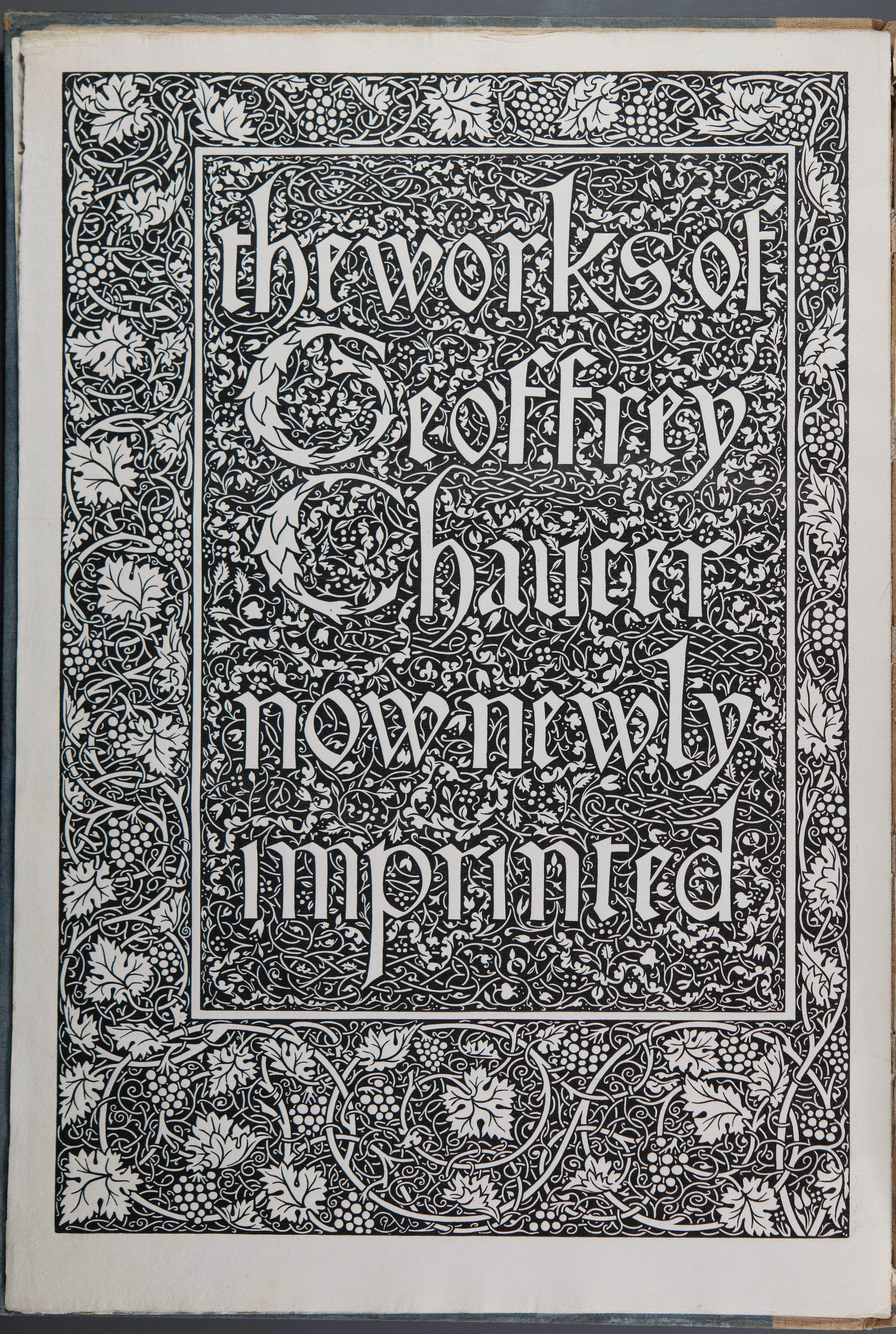 Works of Geoffrey Chaucer, SPEC B-737

Arguably the most well-known piece published by the Press is the Works of Geoffrey Chaucer: Now Newly Imprinted, better known as the Kelmscott Chaucer. This volume is a complete collection of the 14th-century English writer Geoffrey Chaucer, and it was the last publication by the Press before the end of Morris’ life. As Chaucer’s writing was a significant influence on Morris and his own writing, the Kelmscott publication combines his own love of medieval literature with illustrations by Edward Burne-Jones; it is a great synthesis of Victorian medievalisms, bringing 15th-century stories into the 19th century. Works like "The Knight’s Tale" served as a foundational story of chivalric romance and moral dilemmas, themes ever-present in the medievalisms in the Victorian world.

Influence of the Pre-Raphaelite Brotherhood

Victorian authors’ writing mirrored their society at large, where concerns of modernity and science intersected with religious faith and a desire for a shared past. The Middle Ages, then, were a space far removed from these issues.

The poet Alfred Tennyson’s works, like "The Lady of Shalott" and "Mariana," with their liberal uses of medievalism and vivid imagery, were especially appealing to the Brotherhood. Both stories feature a maiden, discontent with her current situation, trapped on an island or in a tower, and awaiting freedom. 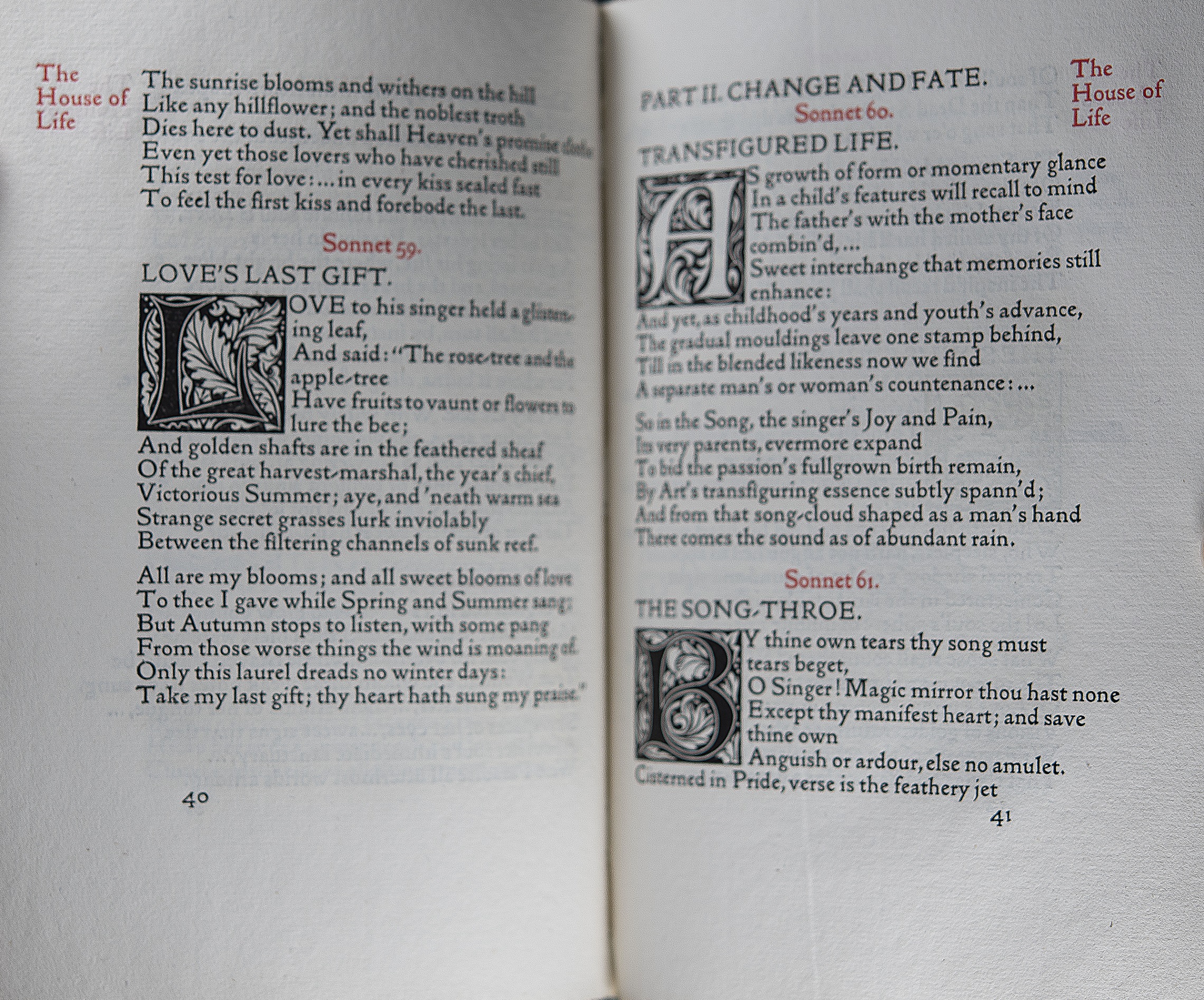 As well as being artists, the PRB wrote poetry themselves. Dante Gabriel Rossetti’s art and writings were closely intertwined with one another. He would write sonnets to accompany the images he painted, adding a layer of sensoriality to his art. His poetry, like "Love's Last Gift" to the right, invoke specific sensory details to the reader. In this sonnet, he writes of the beauty of the natural world, of blooming flowers and sun-touched leaves in summer and spring, as a metaphor for his views on the function of art, namely that art should exist for art's sake. In his own art, these same motifs are present and connect to the wider issues of medievalism and aestheticism that the Pre-Raphaelites and the Kelmscott Press explored. This connection between art and poetry expanded outside of Rossetti's own work as well. For example, he created illustrations to accompany the poem "Goblin Market," authored by his own sister Christina Rossetti.

Read These Stories and Poems

Books by Pre-Raphaelite Associates and Their Influences