Arizona State University Distinctive Collections houses the complete collection of titles issued by the Kelmscott Press. With the exception of the Kelmscott Chaucer, the entire collection was purchased from Arnold Horwitch. These works are a sub-collection of the Pre-Raphaelite Brotherhood Collection. This showcase features three of the many beautiful texts from our collection authored by Morris: The Wood Beyond the World (1894), The Water of the Wondrous Isles (1895), and The Earthly Paradise (1896) and concludes with the Kelmscott Press' crowning achievement, The Works of Geoffrey Chaucer: Now Newly Imprinted (1896). The ornamentations showcase the verdure of the natural world, designed by William Morris, the famous textile and furniture craftsman of the Victorian era.

Our Wood Beyond the World is a copy issued in vellum with the title gilded on its spine and yellow silk ties. The frontispiece was designed by Burne-Jones and the borders by Morris, engraved by W. Spielmeyer. Octavo. Chaucer type, in black and red.

The woodcut engravings in Wood Beyond the World are unique to this Kelmscott publication. Burne-Jones' pictorial and Morris' border on the frontispiece are subtly interwoven: shapes and lines of Burne-Jones' picturesque landscape mirror the large and lush foliage of Morris' ornamentation. Even the woman at the centerfold of this frontispiece resembles a likeness to the aesthetics of Pre-Raphaelite pastiche. The highlight of her hair matches the swooping curls of leaves adorning the borders. The minutiae of such details are harmonious, adding to Wood Beyond the World's timeless beauty. 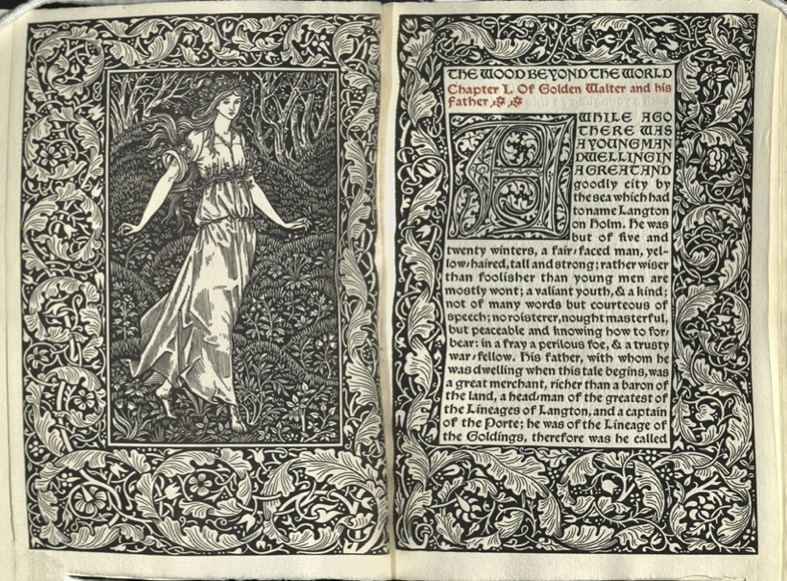 Heroine, Wood Beyond the World, PRB-203

Patterns of grape, vine, and acanthus drape alongside the text, neither distracting nor detracting from the clarity of the narrative. Festive flowers and buds embellish other pages. The Press' meditation on the aesthetics of the page adds a deeper level of engagement the reader has with their physical text, an enhancement to both the book's elegance and clarity.

The frontispiece was replicated for Syr Perceyvlle of Gales (1895) and Poems Chosen out of the Works of Samuel Taylor Coleridge (1895), with border ornamentation used for those two texts, Psamli Pentitalites (1894), and The Sundering Flood (1897). Half border repetitions are notable in The Water of the Wondrous Isles (1895) and The Story of Sigurd the Volsung (1896).

A topic title drawing from medievalist tropes, Morris' take on femininity during the fin de siecle was not only ahead of its time, but introduced an alternate narrative to traditional gender roles. In The Waters of the Wondrous Isles, our protagonist is an independent, intelligent, and beautiful heroine. Her personality and passions are a product of her education and treatment, unrestrained by Victorian, social constructs.

In our collection, The Water of the Wondrous Isles is set in Chaucer, printed black and red, and has its original limp vellum cover with green, silk cords. 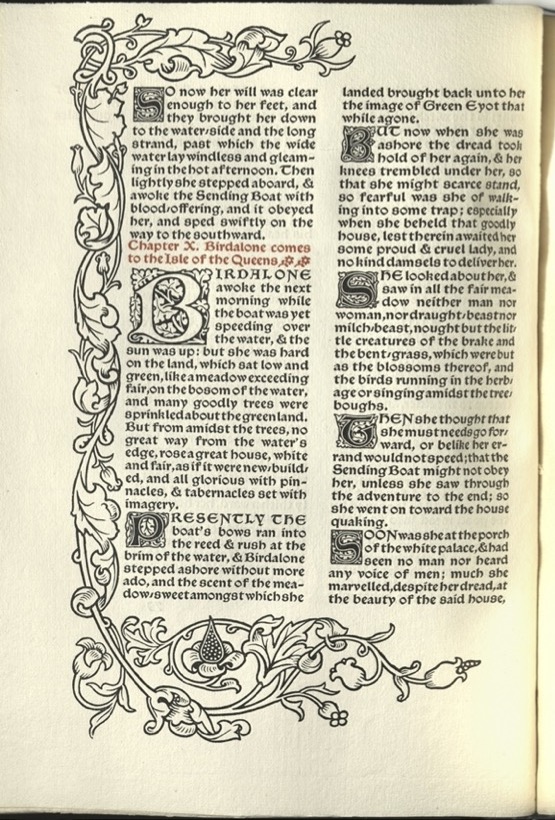 Morris' half borders within the text are sprawling with vines, leaves, and floral embroideries. In The Water, Morris' ornamentations take on a fluidity characteristic to larger texts published by the Kelmscott Press, such as The Well of the World (1897). Here, botanical motifs weave between and throughout the text on the page. Diversity of plants, such as smaller clovers and buds, accent these impressive adornments. In the photos following, an emphasis on acanthus and burgeons take center stage. 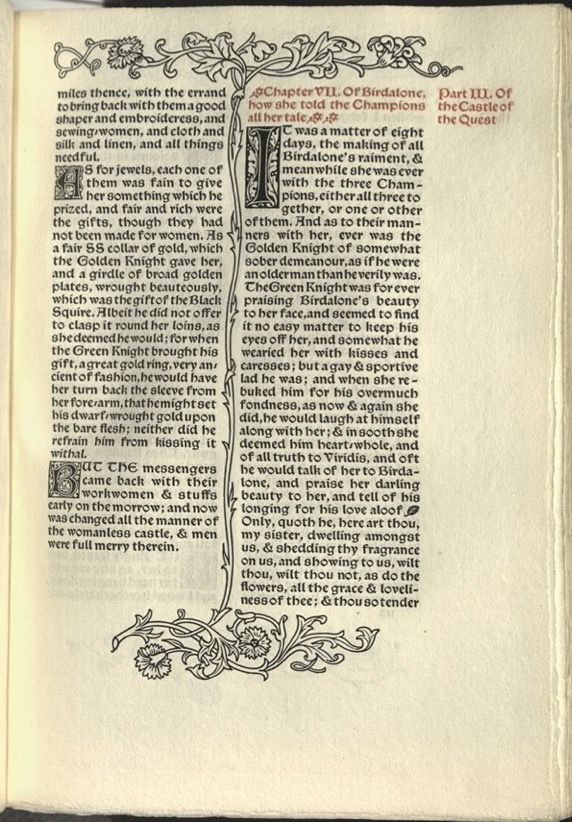 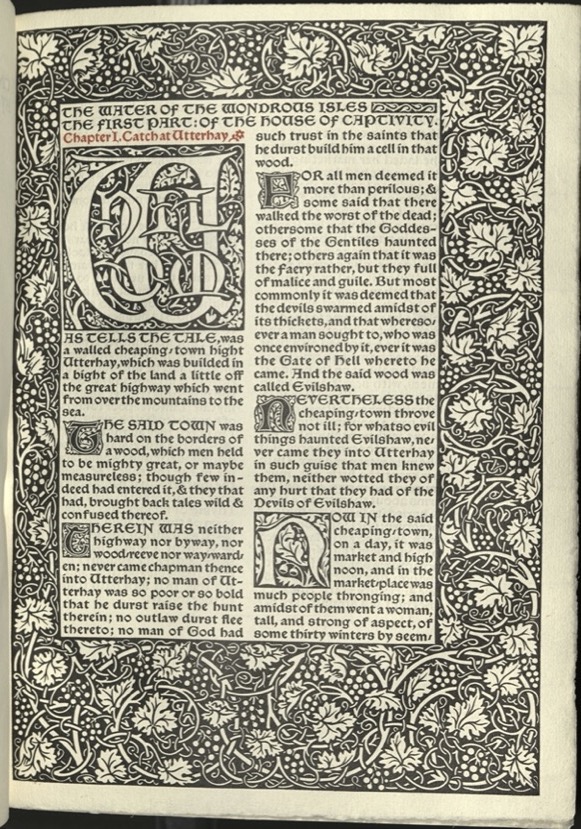 Each of the six parts to The Water of the Wondrous Isles open with decorative illustrations. Some titles are framed by cheery, seasonal flora, while others are surrounded by grapes and winding ivy. These botanicals are bold against a darker background, highlighting nature's fertility. 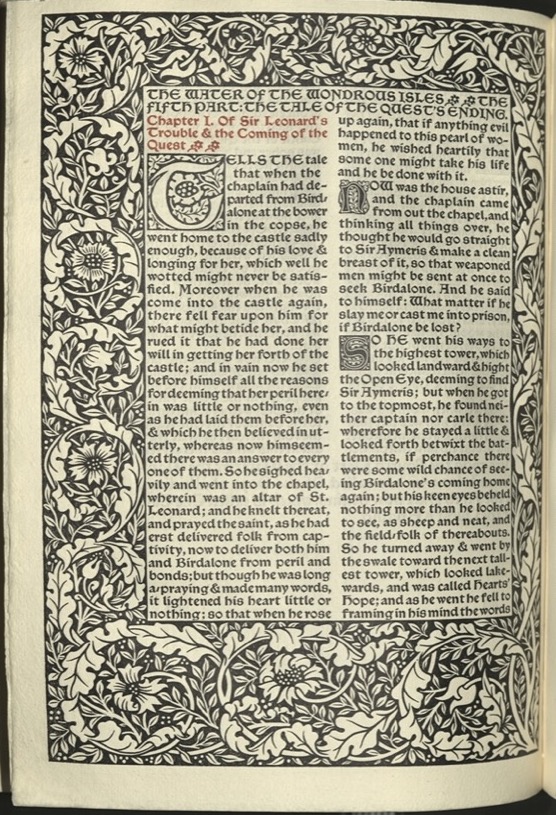 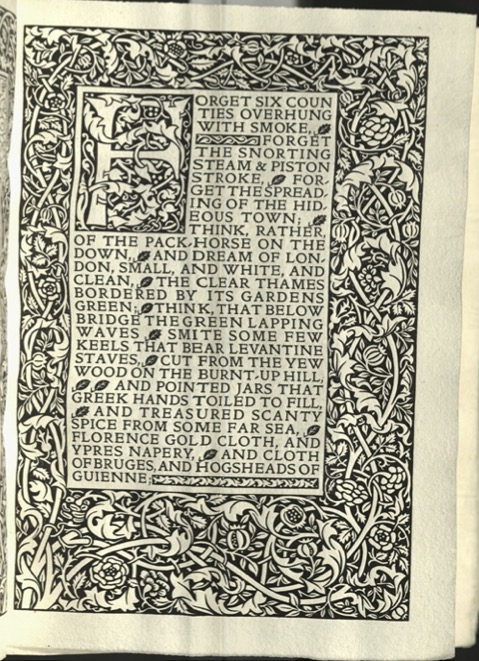 Both art and language are indicative of The Earthly Paradise’s desire to return to halcyon days, mirroring the idealisms of the Pre-Raphaelite movement. Pulling the reader out of the dreary fog of reality, the first poetic verses in volume one of The Earthly Paradise are on the recto of its frontispiece. The union of meter and lush imagery displays the narrative as visually tied to the physical land: both are, in consequence, interchangeable. Both pomegranate and florals border the delicate title and accompanying poetry, beckoning to the sweetness and fertility of what is representative to an earthly paradise.

The Earthly Paradise was the earliest collection of titles by the Kelmscott Press to feature the apple watermark. The latter volumes, five through eight, were published posthumously by the trustees of Morris. Quarto. Golden type, in black and red. 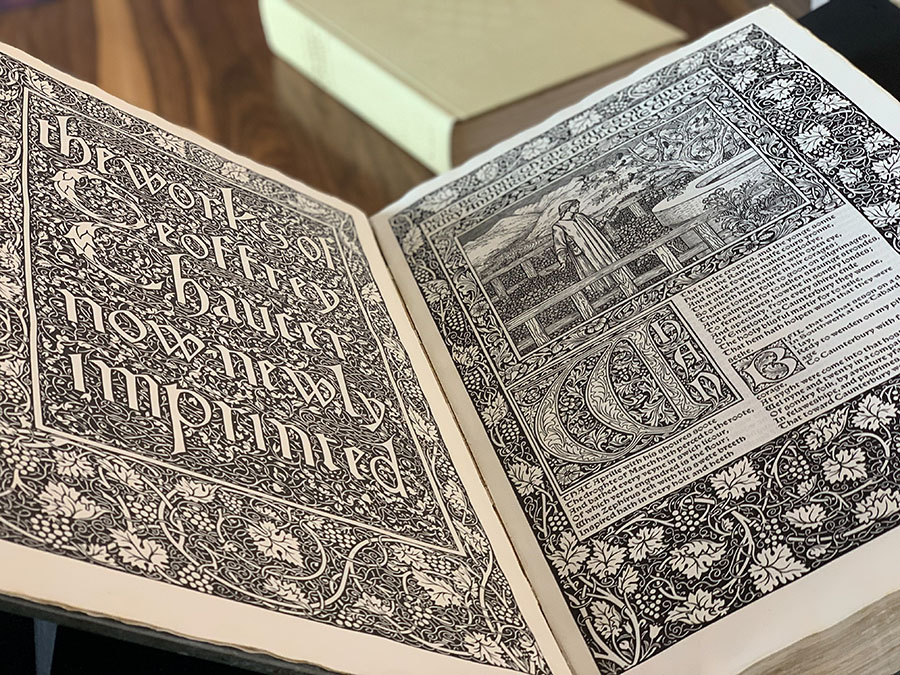 Described as a "pocket cathedral" and "the finest book ever printed" by Edward Burne-Jones, The Works of Geoffrey Chaucer (1896) was printed posthumously for Morris. Between the years of 1891 and 1896, Morris and Burne-Jones designed The Works of Geoffrey Chaucer (otherwise known as the Kelmscott Chaucer) with the help of several collaborators. An artistic masterpiece of the Kelmscott Press, the Kelmscott Chaucer is lauded as the most influential book ever printed, next to the Gutenberg Bible 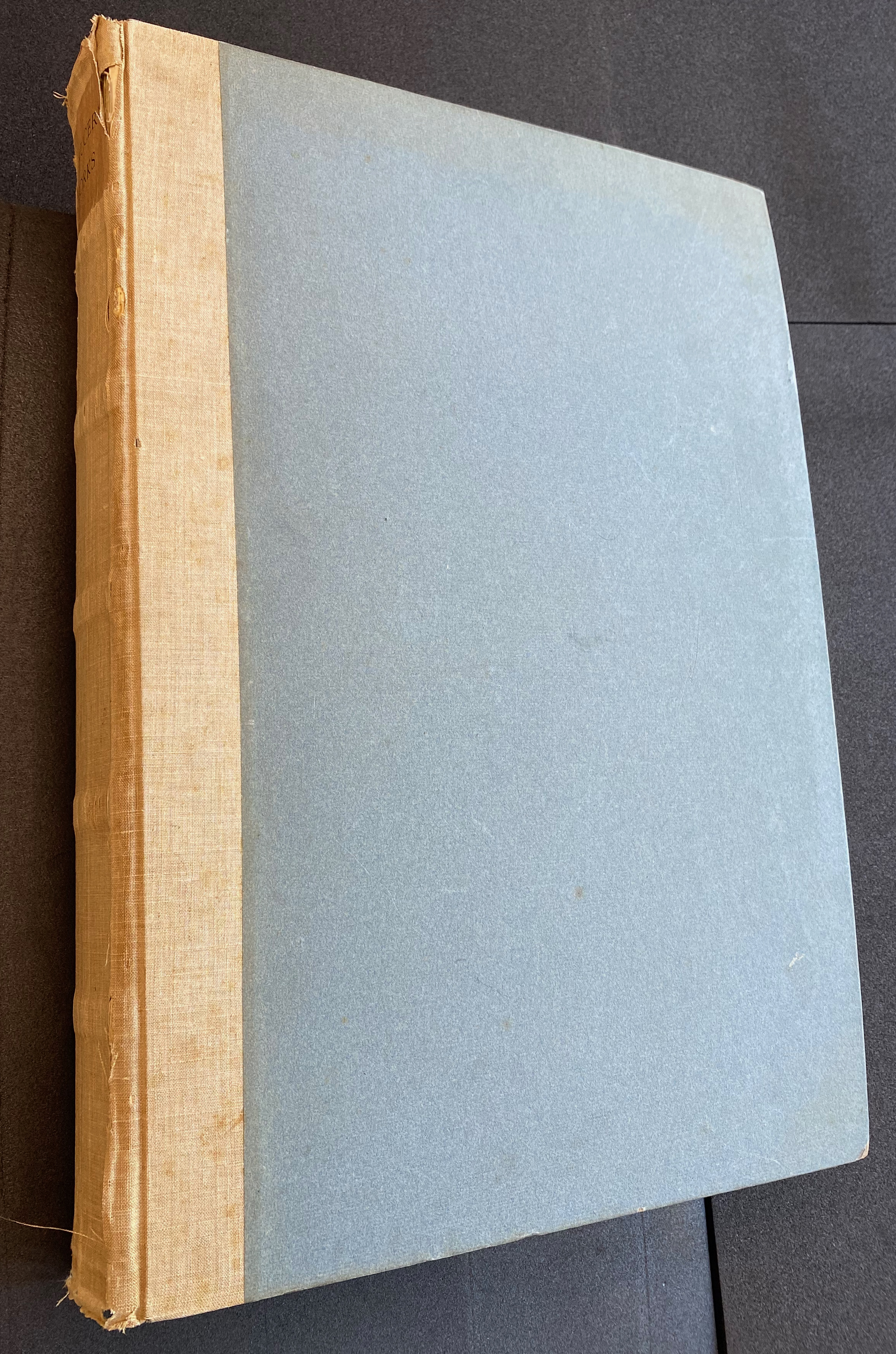 ASU's Kelmscott Chaucer is bound in boards covered in blue paper and is printed on handmade paper. Donated by John Ratliff, the book is one of 425 copies out of the total 438 published before the dissolution of the Kelmscott Press in 1898. A triumph of both political and aesthetic ideals in the Arts and Crafts movement, the Kelmscott Chaucer features 87 woodblock illustrations by Burne-Jones, engraved by W. H.Cooper and R. Catterson-Smith under Burne-Jones' watchful eye. Framing these beautiful illustrations is Morris' famous floral and foliate borders, a popular motif inspired during the mid to late nineteenth century.  "By force of the mere typography," the Kelmscott Chaucer is the embodiment of Morris' passion for the ornate as a means to heighten the readerly experience.