Medievalism as a Reaction to Industrialization

The Industrial Revolution that left London full of factory workers and covered in smog likely influenced William Morris and the circle of artists who shared his values to dream about “better” days. Regardless of the historical truth, the Victorian Medievalists perceived the Middle Ages as replete with beauty, romance, and freedom which the current reality of Victorian cities could not provide. They saw history, specifically the medieval period, as an ideal time to be alive.

Morris was fixated on returning the beauty he perceived to have been lost back into people's everyday lives. In seeming opposition to the times, he was convinced that items of quality were preferable to mass production. To foster his vision of what the world should be, he made wallpaper, furniture, and of course, he printed 53 books, each artfully constructed with incredible attention to detail.

The Arts and Crafts movement eventually gained traction within the broader society and became a stylistic interest of the Victorian era. Works recreated a feeling of the past including King Arthur, Classical Greek mythologies, Shakespearean sonnets, and Gothic literature, which became popular and the subject for many of the books printed by the Kelmscott Press. The printed titles emulate the vibrant stylized letters and ornate drawings of medieval books and manuscripts. 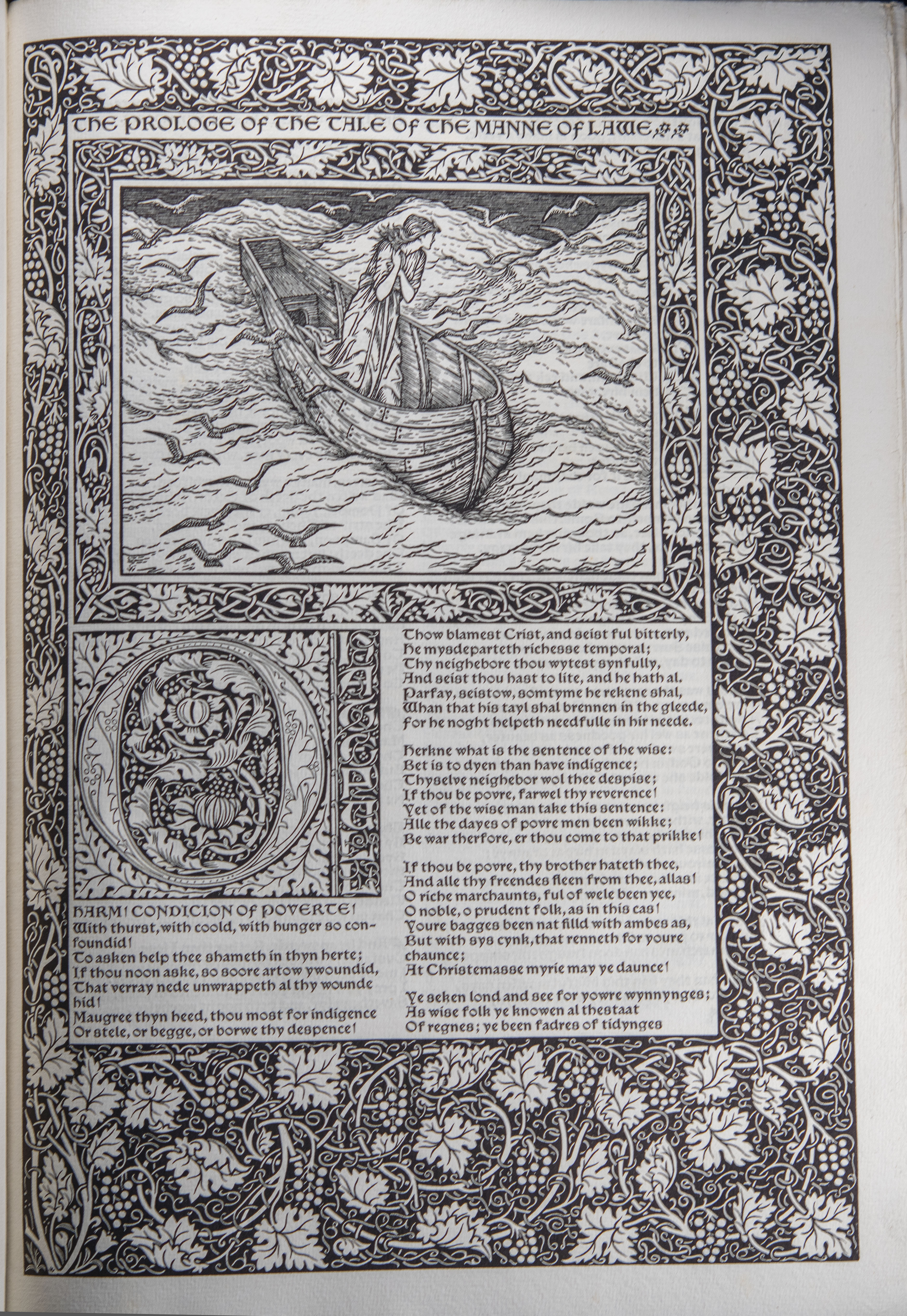 Works of Geoffrey Chaucer, Mann of Lawe , SPEC B-737

This page from the Kelmscott Chaucer has floral decorative borders surrounding the text as well as the spread's central image which is of a lone woman manning a ship through stormy seas. The lettering itself is embellished and part of the intricacy of the book. Motifs found in Morris's borders are vegetation, specifically flowers and fruit which are manifestations of the pinnacle of nature's beauty and fertility. They symbolize the most coveted aspects of nature. The narrative illustration in this case (as with most others in the Kelmscott collection) is by Edward Burne-Jones. His woodcut prints for the Press tend to show women in long flowing dresses, men as knights, or angels in the nude/ lightly concealed by cloth, showing both the character's placement in time and the Victorian Medievalists' desire for simplistic beauty.

These design aspects show the Medievalists' reverence for a time gone by. The idea of simple living in opposition to modernization is a countercultural viewpoint that the Medievalists are not alone in.