The official location for March Mammal Madness tournament information and resources! If you're learning, you're winning! 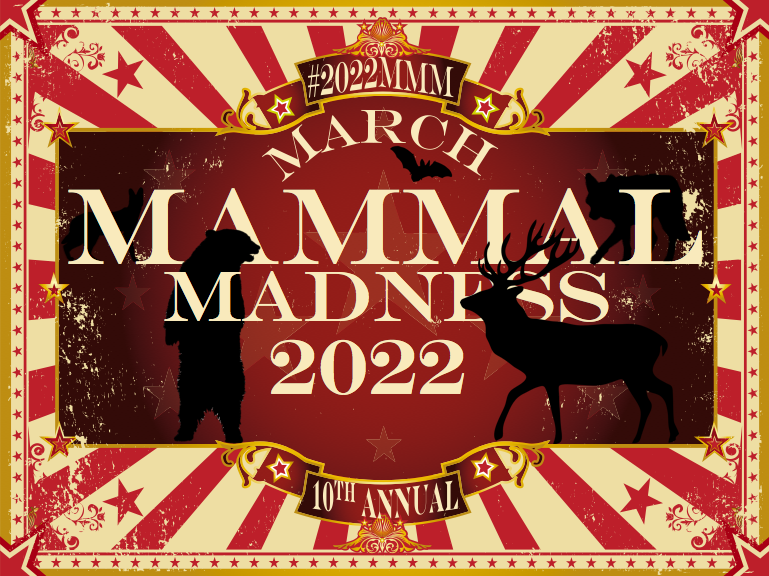 Welcome to March Mammal Madness! This library guide is your official location for MMM tournament info and resources to help you fill out your bracket. March Mammal Madness originated at Mammals Suck...Milk, Dr. Katie Hinde's blog, where she founded MMM in 2013. Each year, the tournament has become more popular, elaborate, educational, and fun.

Inspired by (but in no way affiliated with or representing) the NCAA College Basketball March Madness Championship Tournament, March Mammal Madness is an annual tournament of *simulated* combat competition among animals. Scientific literature is cited to substantiate likely outcomes as a probabilistic function of the two species' attributes within the battle environment. Attributes considered in calculating battle outcome include temperament, weaponry, armor, body mass, running speed, fight style, physiology, and motivation.

We can only suggest the following for maximal fun and learning. Print out the bracket, predict who will win in each of the match-ups in round one, then round two, and so on and so forth, all the way out to your prediction who wins the championship! Get your friends, colleagues, and/or family to play. Post brackets on wall prominently. Trash talk their selections that depart from yours. Follow along in real time to battle play by plays on Twitter by following hashtag #2021MMM or @2021MMMletsgo on scheduled bout nights. If twitter isn't your thing, check the facebook page, the blog, or this library guide for updates a couple hours AFTER the bouts conclude for the night (or the next morning)

No! Real fans don’t abandon their favorite animals just because they are pathetic at this kind of battle (although hopefully well-suited to their particular ecological niche). People will clown you if your bracket is TOO conservative by always picking the better-ranked team.

Also the rankings are not infallible and there are upsets in nature too. Upsets are what make March Mammal Madness exciting. Like in 2015 when #3 seed Quokka exited stage left for those sweet burger rings, allowing #14 seed Numbat to advance!!! OMG! WHO SAW THAT COMING!?!?!?!

Did you know that longtime MMM co-organizers Chris Anderson and Josh Drew aren't even mammalogists? Chris is an entomologist and Josh is a marine biologist who primarily studies fish! AND well, apparently people see "cats" everywhere they look. Most importantly, all animals are awesome, so March Mammal Madness puts an asterisk behind 'Mammal.'

Most probably not. If you have a deep affinity for an animal, but your identity means you are culturally appropriating when you use the term, there are many options. We suggest: "inner animal", "anima", "emblem", or "animal quiddity/quidditas." #WordNerds